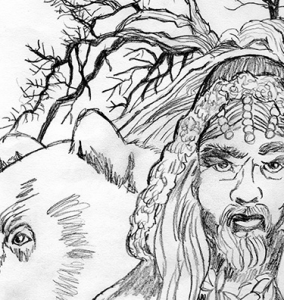 (Above: sketch in progress by Oscar Herrera, not the final illustration)
(July 16 update, the Kickstarter is now live)

On Tuesday, I listened to the nine tracks I’ve written since the sessions for Blood on the Snow. I think five of them are good enough to keep working on. I’m setting aside four of them for now. Tuesday afternoon, I worked on more mixing on the track temporarily called “0819 Guitar” (it’s the upbeat song that Brian played drums on, from August of last year). I think it’s together and coherent, now. I sent stems to Chase, so he can work on some bass and guitar parts.

As you heard in my May 27th Patreon post I am working on is a collaboration with Mark Seelig. He’s a Projekt artist who has worked extensively with Steve Roach and Byron Metcalf. I’ve created an album of trippy, hallucinogenic ethno-organic-electronic music. The primary ingredient is Mark’s flute and throat singing, plus a very slight touch of my electronics. It has an altered-state-of-consciousness feel, in the sense that I envision it as a psychedelic trip with a main character / shaman leading you through a journey of sound.

My idea for the cover is a hyper-realistic illustration of the main character / shaman. Even though the music is trippy, I think it is an immediate, real-feeling experience; the flute and voice are hyper-present in the music, it is not gauzy and distant like some music in this genre. Thus a realistic image made sense to me. Oscar (blacktape’s vocalist) is a graphic artist and works in the pencil illustration style I have in mind. We discussed the idea, emailed back and forth with a few sketches for placement and proportion, and he’s now at work. The image above is a detail of his most recent sketch, it is not the final illustration.

I have the mixes finished now. I’m sending them to Howard for mastering, once he finishes some other projects he’s working on.

I plan to fund this album as a Kickstarter, to pay Mark and Oscar for their work (and hey, something for myself too!).

I’m also thinking of including a cassette release within the premiums. What do you think? Did you know that cassettes are a thing? Vinyl is yesterday’s news (again). Now it’s cassettes. They are incredibly cute and totemic. I like the idea a lot more than vinyl. Perhaps it’s because making a cassette cost 10% of what vinyl costs and there’s none of that annoying metal-work process and test pressings. Cassettes can be made in two weeks, rather than the six months of vinyl. But I digress.

If everything stays on schedule, you’ll hear from me shortly regarding the Kickstarter.

Part of the habit of working on my own art Tuesday and Thursday (see next post for more on that) is getting the routine/ritual down; I don’t want to get side-tracked during the month of the Kickstarter campaign. I want to keep working on BlackTape material.

When I woke up this morning, my son was still asleep. Since my studio is right above his bedroom, I didn’t want to start making noise. I wrote this blog instead. That’s a productive use of my early morning hours. Now I need to take my kitty to the vet for a check-up. Then I can get to the studio….

Back to the music soon….