I want this to be my job! 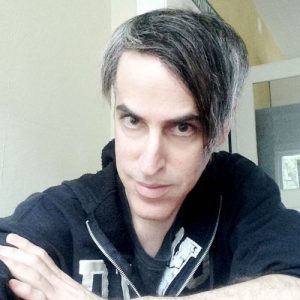 Hi. I’ve been mulling over this message since I did my taxes last month, wondering how to phrase it. Yesterday, I realized I have 42-minutes of new demos (more about that below); it seemed like a good time to ask.

As you may know, along with writing/creating my music for Black tape for a blue girl, running Projekt Records has been my full-time job since 1991. There was a time in the mid-90s, when Blacktape was the best selling band on the label. Remnants of a deeper purity connected with a lot of people, it sold quite well. I could have pursued music/art as my full-time thing, but I felt the tug of loyalty and obligation to the artists on the label (and the 11 people I employed). I made choices that slowed down my own creation, in service to others. In 2002 I had a son, this was time I gladly spent away from my music.

Along with these postponements of my creation, in 2002 the music industry began a period of amazing turmoil; Projekt’s income decreased year over year, and I kept downsizing to stay ahead of the tidal wave. Years ago I got out from under Projekt’s debt, but I must admit that 2016 was one of my worst years ever for personal income. I was shocked by the meager total on line 43 of my 1040 return. Fortunately, I moved to Portland Oregon four years ago, it’s very reasonable to live here. I’m ok; though I am concerned about the future.

I often say that in a few years, I’ll be forced to retire from the record label business because there won’t be much of a record business left.

Let me tell you, I’m kind of excited about that! I would love to transition from running the label to supporting myself via my own art. It sounds like a challenging and rewarding proposition.

Life is about taking risks and pushing out of secure spots. I went to a lecture by Jungian therapist James Hollis on Friday; I wrote this down, “We die when fear governs our choices. We die when we stop growing in order to have security. We die when convenient securities are chosen over inconvenient insecurities.”

I’ve got a lot of life left!

In 2014, after a five year break, I began creating Black Tape For A Blue Girl music again! With fan’s Kickstarter backing, I released the double-LP These fleeting moments in August of 2016, the 4-song Blood on the snow maxi CD in March of this year, and I’m now working on new songs for the next album.

Over the last four years, I’ve raised $35,000 via six Kickstarter crowdfunding projects. I’m proud of that, both because I’ve created a lot of new music, and because I have passionate followers who want to see my music succeed. But do the math! $35k is not enough to survive on, I can’t live on $8500 a year; especially when that’s all going to manufacturing the CDs / LPs / shirts / etc for my backers. It’s not money that goes into my pocket.

I started a Patreon a few years back. Patreon is a crowdfunding concept where people who love my art and want to see me create more of it support via a small monthly credit card payment ($2-$5-$10) which I use to cover expenses of creation. Ie: pay band members to record, studio rental, gear repair, repressing out-of-print albums, etc. Patreon brings in around $450 a month (before their fees) which helps out on making art.

That would cover my creation expenses, and also a large chunk of of my living expenses. This would mean less time at my computer dealing with trivial emails and other Projekt label stuff. Don’t get me wrong, I wouldn’t stop Projekt. It definitely matters to me, and I work with great artists that I respect. But I am looking realistically at how the business is shrinking. More income from my art would allow me to reduce the part of Projekt that feels like spinning the wheels: putting out releases that maybe make their money back or turn $300 profit.

I’d rather spend my time working on music. Writing lyrics. Shooting photos. Reading books and talking with friends to get inspired.

And you can be part of this. If you can spare $2 or $5 a month to help me be an artist. If you don’t have the cash, I completely get it. No problems. Perhaps you support my Kickstarters, or just listen on Spotify. That’s ok, everyone’s budget fits somewhere into the puzzle.

In talking with my supporters, I realize some have done quite nicely for themselves; they grew up with my music, worked hard and are at a great place in life. It’s nice to hear about people’s success and interesting jobs. It’s nice when they want to contribute a little bit to support me, so that I can make more art. I appreciate it.

Can you be a patron of my art?

On Saturday, I sent my Patreon backers a 42-minute package of demos. They get to hear all the material I’ve created lately. I’ll refine some of those songs and record them with the band for the next album. And some will never be heard again. That’s one of the benefits of being a backer: you get to hear the art in progress.

All new backers who pledge at Patreon will also get the April package of demos. Can you spare the cost of a cup of coffee, once a month, to help me be an independent artist? If you can, that’s super cool of you!
Thanks.